Home » LATEST » Biden Carrying out one of Trump’s Biggest Promises 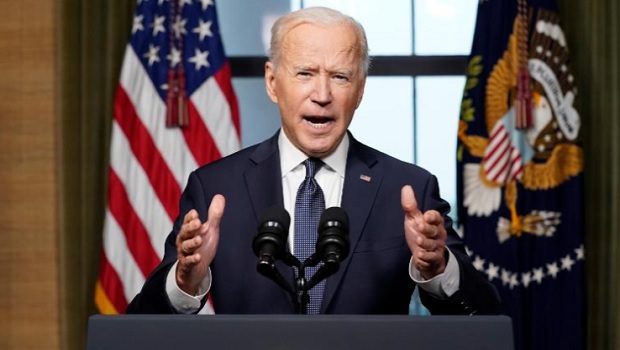 Biden Carrying out one of Trump’s Biggest Promises

(CNN)President Joe Biden is carrying out some of Donald Trump’s biggest campaign promises by leaving America’s longest war, targeting economic aid at forgotten Americans and building an infrastructure plan that may actually happen.

The current White House is, of course, a sharp political and behavioral reaction to the previous one. And Biden is never going to finish his predecessor’s border wall, berate allies or set a mob on the US Capitol.

But the 45th and 46th presidents do share an understanding of several key economic and societal forces driving modern life outside Washington. And both, in different ways, shaped their appeal by convincing ordinary Americans who feel left behind that they were committed to working for them.

With his new vow Wednesday to get troops home from Afghanistan and his big legislative proposals that elevate the working class, including a $2 trillion infrastructure bill, Biden is eying achievements his predecessor talked up but failed to accomplish.
Biden, like Trump and President Barack Obama before him, ran for office on a platform of extricating Americans from quagmires, spending the trillions such wars cost here at home and restoring economic fairness.

While the previous two presidents made progress in various ways toward those goals, the current commander-in-chief has put them at the heart of everything he does. Political and outside factors could still frustrate Biden — not least a wafer-thin margin of error in a 50-50 Senate. And the world has a habit of disregarding American presidents and their big foreign policy pronouncements.

But so far, Biden is not being distracted. Indeed he is turning his plans to beat the pandemic into a double purposed quest to lift up everyday Americans — one reason why his $1.9 trillion Covid relief plan was quite popular with Republican voters, if not their representatives. And he and national security adviser Jake Sullivan envisage a foreign policy built around the needs of US workers — Americans First, rather than Trump’s

“America First” philosophy.Biden’s decision to wind down America’s longest war drew ample criticism Wednesday from prominent military figures and hawkish Republicans. South Carolina Sen. Lindsey Graham, for example, said Biden was canceling “an insurance policy” that “would prevent another 9/11.” But the President’s action was largely aligned with public sentiment nearly 20 years after the 9/11 attacks. The White House acknowledged on Wednesday that there was disagreement among some of Biden’s military and national security advisers. Ultimately the President was guided in part by his popular campaign promise to voters that he would end “forever wars.”

Trump made a similar promise, but never followed through. In harsh terms before he ran for the White House, Trump called the war in Afghanistan “a complete waste” on Twitter and voiced his disapproval for “wasted lives” in the conflict. Pledging to halt “endless wars,” Trump often said America ought to “rebuild the US first,” a line that drew applause at his rallies and made many of his working-class supporters believe that he would put their needs first — even though many of his economic policies ultimately ended up favoring the wealthy and big corporations.

Biden never demeaned the lives that were lost in the Iraq and Afghanistan conflicts, but — like Trump — he argued in his own way that those “forever wars” distracted from more pressing issues at home. On the campaign trail in 2020, he often noted with pride that he had argued against Obama’s surge of troops to Afghanistan in favor of a smaller, more nimble footprint focused on counterterrorism, and said he strongly opposed the “nation-building” strategy that the US had adopted in Afghanistan.

Never losing sight of the audience that he needed to win the presidency, he also spoke of shaping a foreign policy that aimed to bolster America’s middle class by sharpening the competitive edge of the US against China and other foreign powers. “Staying entrenched in unwinnable conflicts drains our capacity to lead on other issues that require our attention,” Biden wrote in the March/April 2020 issue of “Foreign Affairs,” “and it prevents us from rebuilding the other instruments of American power.”

โพสต์ต่อไป
Why are so many babies dying of Covid-19 in Brazil?