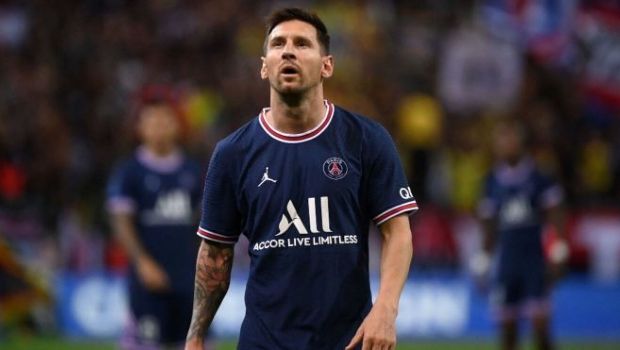 Lionel Messi admitted he was “getting desperate” to score his first goal for Paris Saint-Germain before breaking his duck against Manchester City last night.

Messi came back to haunt Pep Guardiola again and clinched a 2-0 win for PSG in the Champions League with a sublime finish after playing a one-two with Kylian Mbappe.

The Argentine had failed to score in his first three appearances for PSG – against Reims, Club Bruges and Lyon – after joining on a free transfer from Barcelona, a drought by his standards, but said he is feeling more settled in the team, and warned opponents his relationship with Neymar and Mbappe is developing.

“It’s true that I was getting desperate to score my first goal,” Messi told broadcaster Canal Plus.

“I hadn’t played much recently and I had only played once here at home but I am settling into the team little by little.

“The more us forwards play together, the better our relationship will be. We all need to grow together and improve and keep giving our best.”

PSG boss Mauricio Pochettino said he had to celebrate Messi’s 74th-minute strike, which broke City’s will following Idrissa Gueye’s emphatic early finish, after watching the little genius score so many times against his teams.

Messi once scored four for Barcelona against Pochettino’s Espanyol and netted twice in a sublime performance as the Catalans thrashed Tottenham 4-2 at Wembley in 2018.

“I did celebrate the goal. Usually I don’t celebrate goals, I keep it to myself, but today, for Messi, I did,” said former Spurs boss Pochettino. “I spent years watching Messi score goals from the opponent’s side so this time, scoring for my team, that’s great.”

City were the better side between the goals and twice struck the crossbar through Raheem Sterling and Bernardo Silva in the first half, the latter an extraordinary miss, while PSG goalkeeper Gianluigi Donnarumma made a succession of saves.

Guardiola, whose side trail PSG and Club Brugge in the group after two matches, was pleased with City’s performance but admitted Messi is “unstoppable”.

“We dealt with PSG first of all but we know it’s impossible to control Leo during 90 minutes,” he said.

“He was not much in touch with the ball – of course he was coming back from injury, he needed a bit of rhythm – but we know quite well when he can run and get close to the ball he is unstoppable.”