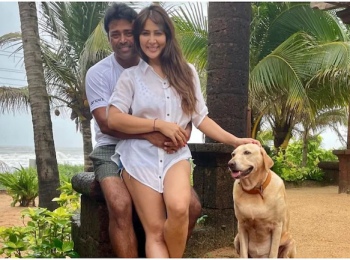 Sports personalities dating Bollywood celebrities is not new. It seems like we have a new duo on the list. Tennis star Leander Paes and actress Kim Sharma have sparked dating rumours with their photos of vacationing together in Goa. The snapshots were shared by a restaurant in Goa on social media. Take a look.

It is not the first time that Leander Paes and Kim Sharma have been spotted together. Last month, they were clicked by paparazzi in Bandra Mumbai. However, it is the first time that the two have been seen holidaying with each other. Their photos were shared by Goa’s restaurant, Pousada By The Beach, on Instagram.

In the pictures, Leander Paes can be seen hugging Kim Sharma from behind and enjoying a meal together. “Biscuit & Chai hosting Leander Paes and Kim Sharma at Pousada by the Beach. @pousadabythebeachgoa (sic),” the official page of the restaurant captioned the post

Taking to her official Instagram handle, Kim Sharma posted a picture of herself. In the snap, she is smiling for the camera in a white shirt and denim shorts. The photo seems to be from the same day. “#Mood (sic),” she captioned the post. She added a picture courtesy to Mr P, and no points for guessing that it is Mr Paes.

Leander Paes was in a live-in relationship with model Rhea Pillai, with whom he welcomed a daughter, Aiyana. Kim previously dated actor Harshvardhan Rane.

Kim made her Bollywood debut in 2000 with the Shah Rukh Khan and Amitabh Bachchan-starrer Mohabbatein. She was next seen in Fida and Taj Mahal: An Eternal Love Story. Leander Paes is a renowned tennis player, who will soon reunite with another tennis star, Mahesh Bhupathi, for an OTT project. He also tried his luck at acting with the 2013 film Rajdhani Express.