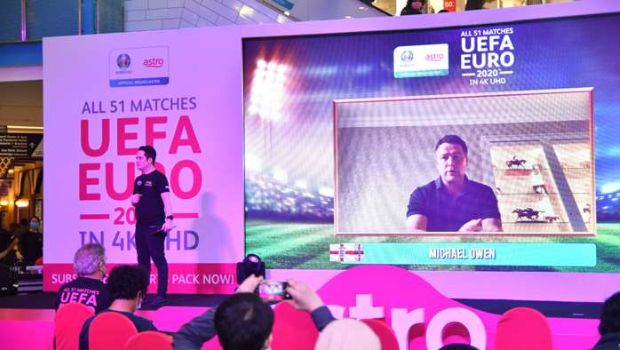 Malaysians can be rest assured that they will be getting the best coverage of every single of the 51 Euro 2020 matches only on Astro.
The European Championship will be available in ultra high definition for the first time in Malaysia! As the official broadcaster, Astro will be providing the best coverage of the Euro 2020 with all 51 matches not only being shown LIVE but will also be available via two dedicated UHD channels.

Portugal will be out defending the title they won in 2016, a full year later than they would have had the global pandemic not forced UEFA’s hands to postpone the tournament and subscribers to Astro will have the opportunity to catch every single moment of the competition from start to finish.

Subscribers to the Sports Pack on Astro will be getting complimentary access to Euro 2020 with the two dedicated HD channels and two UHD channels. Selected on demand content are also available to those not on Sports Pack. There will also be a selected number of matches that will be made available on Astro Arena

Kicking off the run-up to the tournament that will begin on June 12, Astro’s launch on Thursday evening also included a special appearance by former Liverpool and England star, Michael Owen. Chatting via video call, Owen answered questions regarding the tournament and was already eyeing three potential winners.

“I can see there being a surprised underdog maybe being able to reach the quarterfinals but on the teams who can lift the trophy, I can’t see past one of the big teams. Portugal has got a fantastic team and you have to put England in there. France are looking very strong once again as well. If there’s one youngster who can make a name for himself in this tournament, it has to be Jude Bellingham,” he said.

Owen is likely to return to Malaysian screens during the course of Euro 2020 as a pundit as Astro lines up big names to head their cast of experts during the pre-show as well as analysis show that will provide a great compliment to each and every single of the live coverage.

Astro will also be making the matches available to be streamed via their Astro Go mobile application which will arguably be a big benefit for those unable to catch the match at home with cloud recording available for those who missed the early morning matches.

“We’ve being doing the European Championships and World Cups since 1998, if you look at it, it’s more than just the 90 minutes of matches. We have studio shows with guest star pundits that will drive all our supporting programs throughout the tournaments where we will have analysis, highlights and more,” explained CK Lee, the Head of Sports at Astro.

Adding to the fanfare surrounding the tournament, Astro will also initiate activities at local businesses such as cafes, pubs, bars and local eateries by putting up signages and such to drive customers towards those establishments to catch the latest live Euro 2020 live matches. Astro will also be giving away 51 4K television to further increase fan’s excitement.

“It’s about bringing different ways to consume the Astro content. You can watch via the Astro box at home, and you can also go out there and watch it with your friends over ‘teh tarik’. It’s important for our content to be omnipresent whether that’s at home or out of home. That’s why we are very committed to our commercial establishments, we want to make sure we are there for the on-ground initiatives,” said Azlin Arshad, Commercial Director of Astro.