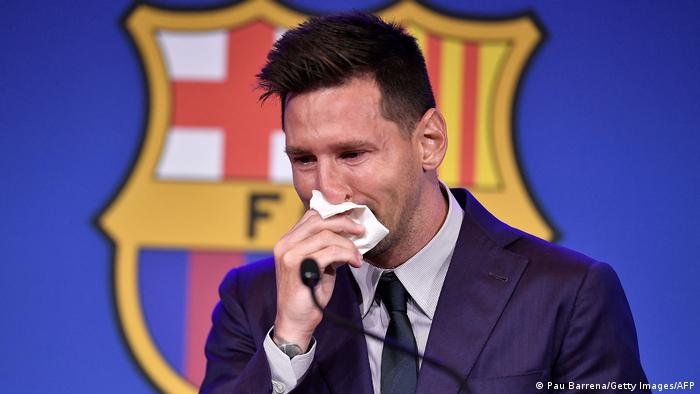 Messi confirms he is leaving Barcelona, in talks with PSG

Messi confirms he is leaving Barcelona

Lionel Messi wept on Sunday as he bade farewell to his boyhood team FC Barcelona and confirmed he was talking with French club Paris St Germain over a possible move.

The 34-year-old Argentine’s emotional news conference followed Barca’s announcement last week that it could no longer afford him after a glittering two decades.

French newspaper L’Equipe reported on Sunday that he will travel to Paris either Sunday or Monday to undertake a medical and finalise a deal with the Qatar Sports Investment-owned club.

While Messi did not confirm he would definitely join the Parisians, he said his plans were to carry on playing as long as possible, adding he still harbours ambitions to win another Champions League trophy.

“As long as I go on being competitive and as long as my body responds (I’ll carry on playing),” he told a news conference.

“As long as I can, I will carry on competing.”

PSG declined to comment on the report that Messi would be arriving in Paris later on Sunday. “We are not in a position to confirm anything,” a club spokesman said.

“I tried to behave with humility and respect and I hope that is what remains of me when I leave the club,” said an emotional Messi as hundreds of fans, many wearing his No. 10 jersey, massed outside Barca’s Camp Nou stadium to bid farewell to the player they called Messiah.

Messi broke down as he walked onto the stage before conducting his news conference and was handed a tissue by his wife Antonella Roccuzzo as he fought back the tears.